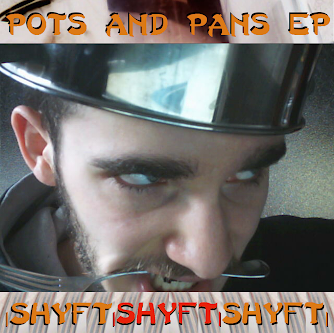 SHM045 – Shyft – Pots and Pans EP – Officially released in 2009, this is a house/techno/IDM extended play by Shyft. The tracks all share a common trait: most (minus the bass drum) or all of their percussion consists of kitchen equipment samples, such as a fork striking a pot lid, the opening and closing of meat scissors, and the rattling of a jar of raisins. The first track may be best described as a fusion of techno and house; the second track is a sort of dissonant, symphonic techno, while the third track- of which half credit goes to The Gabber Jihad- is a gritty IDM song. The Gabber Jihad assisted in the sample recording process, as well.

Down Load Pots and Pans EP